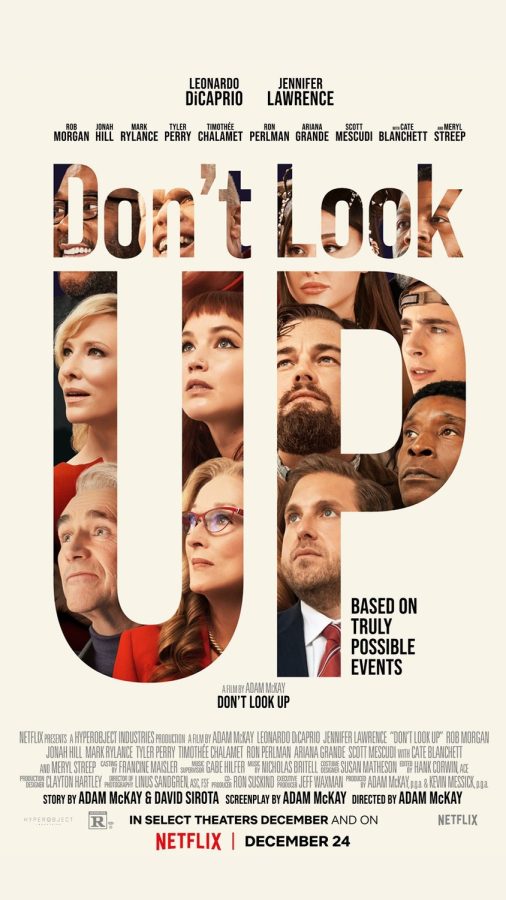 The Netflix original movie “Don’t Look Up” is filled with satire, witty comedy, and a cast full of A-list actors. The plot is about two scientists who discover a gigantic comet that is six months away from destroying the Earth. When they try to tell politicians and news reporters about the situation, everyone doesn’t care and is in complete denial until it’s too late.

While the movie is decent at best, it does a good job of portraying how the real world is dealing with these significant problems we are facing. A top critic from the Jewish Chronicle, Linda Marric posted on Rotten Tomatoes, “Very silly, yet undeniably urgent.” The comet is a metaphor for how climate change is affecting the Earth and shows us how our actions on the world are causing so much destruction to the planet that could ultimately end humanity as we know it; the sad part is all we can talk about is the A-list celebrity cast.

When I look up the movie on social media, all I see are comments and videos about how great the actors look and how funny the lines are in the movie instead of talking about the scary reality that our planet is dying.

According to NASA, “ If warming reaches 2 degrees Celsius, more than 70 percent of Earth’s coastlines will see sea-level rise greater than 0.66 feet (0.2 meters), resulting in increased coastal flooding, beach erosion, salinization of water supplies and other impacts on humans and ecological systems.”

We make up reasons to neglect what’s going on, and we refuse to open our eyes to the truth because it’s scary. It’s terrifying to think that the human race can go extinct at any moment because of how we treat the planet. We think that if the world does end, it won’t be until many years until after we are dead, so why care? What about the future generations that have to live in the world we created and are destroying? We are leaving them a damaged planet, and by the time they try to fix it, it will be too late.

“Don’t Look Up” delivers a strong message to viewers about climate change and how we need to start making changes to make the planet a better place to live.