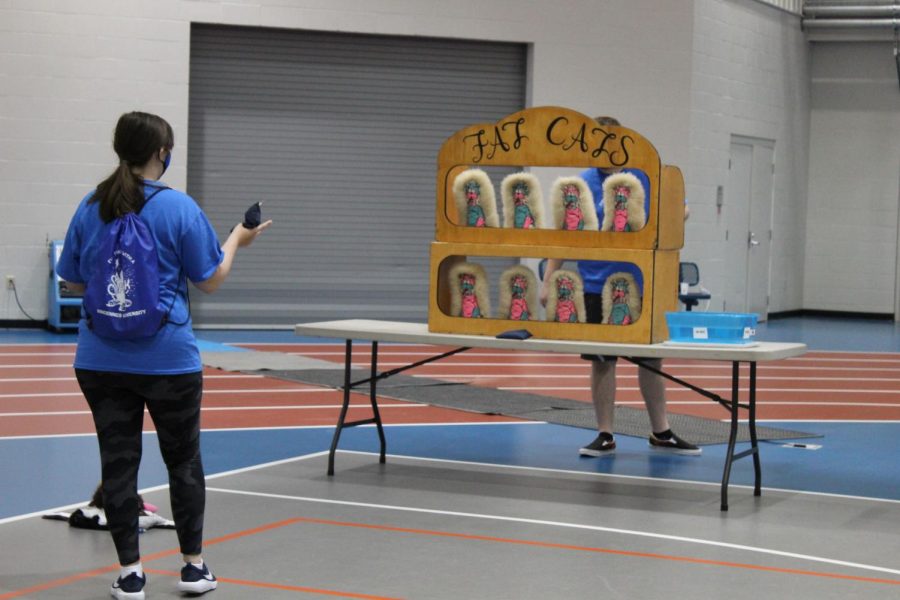 A student tries one of the carnival games during Blazerpalooza.

Blazerpalooza was an exciting night for all Vincennes University students who attended on Aug. 21. The event started at 1p.m and lasted until 9 p.m. Throughout the day, students engaged in games such as skee roll, bottle ring,and a dunk tank, while enjoying free food offered by the Tecumseh Dining Center (TDC).

“Blazerpalooza was so fun; I loved the carnival games, making new friends, rocking out to the bands, and seeing Director Adam Booher get dunked in the dunk tank! I made so many great memories at Blazerpalooza, so I’d definitely go to another event if they had one,” said  Grace Jones, an elementary education major.

Bad Suns set the bar high as the first performance of the night at the Blazerpalooza fest. The Bad Suns band lit up the stage with songs such as “Dancing on Quicksand”, “Swimming In the Moonlight”, and even sang their new song “Baby Blue Shades”.

Country music artist Tyler Rich ended the night with upbeat, heart thumping songs such as “Leave Her Wild” and “11:11”; and performed emotional, personal songs such as “Still Love You”, and a cover of Michael Jackson’s “Billie Jean”. Throughout the concert, his interaction with the crowd made the place liven up with vivacious energy . As his concert came to an end, Rich surprised everyone by giving his guitar pick to Director of Student Services, Annie Garner.

“It was definitely not something I was expecting so I was very shocked when he came to the front of the stage and handed it to me! It was an extremely sweet gesture since he knew I was the Director of Student Activities and I’m very excited to add it to my wall of memorabilia of Activities I’ve put on,” said Garner.

By the end of the night, the fun-filled festival was well worth the hard work that was put into it.

“There’s so much that went into putting together BlazerPalooza. Speaking with band managers, production companies, and carnival game vendors along with figuring out catering and food for the whole day and pulling together enough volunteers to run the event are all major things that took a lot of time to get figured out. Making sure all of the logistics were figured out and in place was a huge task, but we pulled it off and everything seemed to go really well,” said Garner.

For more information about upcoming Student Activities go to: https://www.vinu.edu/all-events