“What Were You Wearing?”: Survivor Art Installation on Display 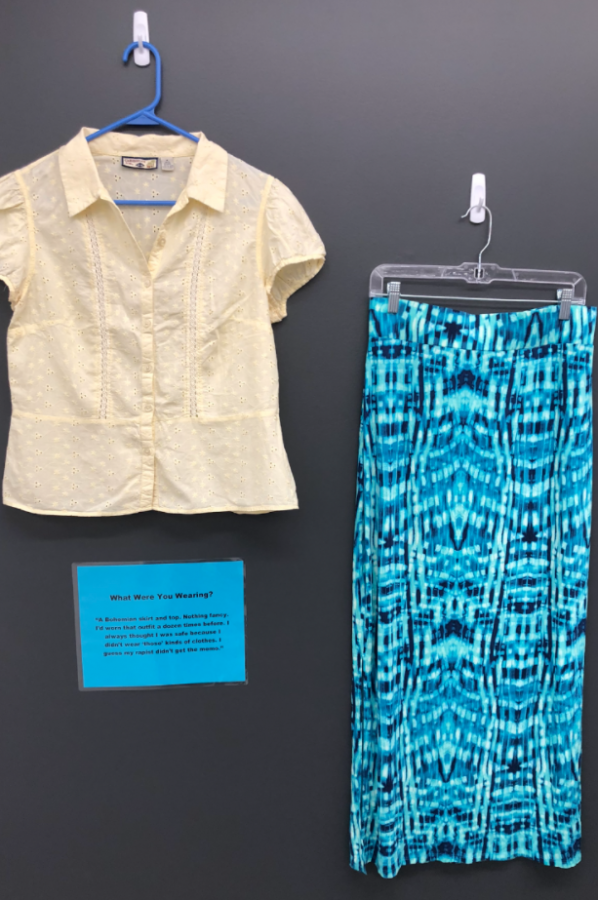 A display from the "What Were You Wearing?" installation in the Learning Resource Center.

Sexual assault can happen to anyone at any time, and the VU Counseling Center teamed up with Hope’s Voice, the Pace Health Connection, and the Shake Library this month to bring awareness to this fact with the “What Were You Wearing:” Survivor Art Installation, located in the Learning Resource Center and online.

The installation displays the clothes that sexual assault victims were wearing during their attack, along with the victims explanation of what they were wearing.

“We are always looking for new ways to educate our students about the serious matter of sexual violence. ‘What You Were Wearing?’ has been utilized as an awareness and educational tool on a number of college campuses across the country and we wanted our students to have the opportunity to learn more about the harmful effects of victim blaming,” Kathy Evans, one of the counselors from the VU Counseling Center explained.

When asked about the type of message that the organizations were wanting to convey to the students on campus, Evans noted that they wanted to start the conversation:

“We want to start the conversation that sexual violence is not about the clothing a person was wearing, or even what a student was drinking. We want to create a change in the way people see rape in our culture, and understand that there is no excuse for rape.”

The display consists of items of clothing consisting of various tops such as t-shirts, sweatshirts, and dress shirts.

“Some of the clothing was donated by members of the local community and the remainder was obtained from local used clothing stores,” Evans mentioned when asked where the campus got the clothing.

Every step towards making people more aware of sexual assault, not just on campuses, but everywhere, is a step worth taking to bring about a decrease in the growing percentages of sexual assault around the world.

“The installment is both virtual and in person. Both installments also have information about where students who have experienced sexual violence can go for support,” Evans said.