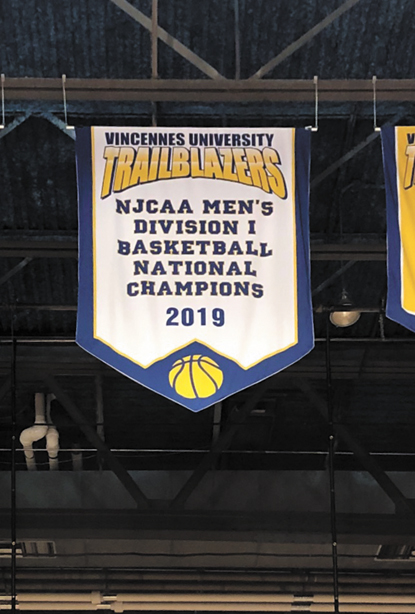 As the evening of Friday, Nov. 1 rolled around, the University’s gym was filled with excitement as students and the Vincennes community filled the bleachers to watch the first game of the season for the defending national champion men’s basketball team, The Trailblazers, against Southwest Tennessee Community College (Memphis) in the 58th annual Kiwanis Classic.

It was an exciting first half of the game leaving the Trailblazers ahead at halftime 40-31. The Trailblazer’s worked hard up and down the court and ended the game winning 70-50.

Colton Sandage, sophomore, commented that the game was a pretty cool experience as there were a lot of former players that attended to see the banner being raised.

“A lot of hard work was put into that banner,” Sandage expressed.

When asked about what he thinks the team as a whole needs to work on this season, Sandage said that their defense could always be worked on and could always get better.

Sandage made sure to announce that fans can expect a lot of exciting basketball from the team this season.

“Hopefully there will be a lot of wins!” Sandage exclaimed.